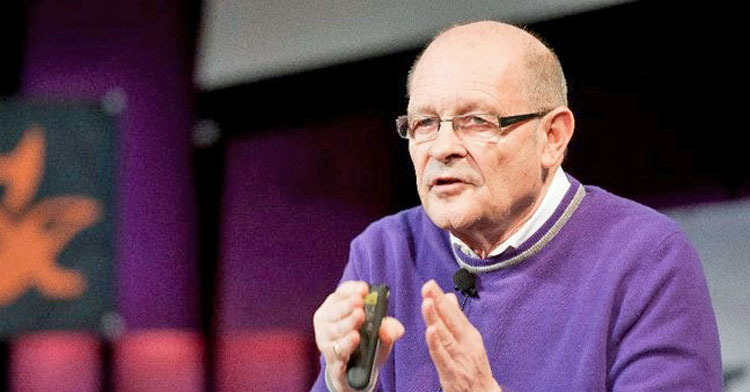 In this post I get to interview Drayton Bird… one of the all-time greats in the world of copywriting.

If you’re not familiar with Drayton Bird, it’s time to catch up. According to advertising legend David Ogilvy, “Drayton Bird knows more about direct marketing than anyone in the world.”

That’s a heck of a testimonial.

I’ve been a huge fan of Drayton and his work for decades now. And when I finally got to meet him a couple of years ago, he continued to amaze. He’s all passion and energy!

I’m really grateful for this opportunity to ask him a few questions.

Nick: I’m just a few months away from my 40th anniversary as a professional copywriter. It amazes me that I’m still in the same profession after so long. And it amazes me even more that I still love what I do.

But, while I’m happily patting myself in the back, a small voice reminds me, “Heck, you hadn’t even learned to walk, let alone write, when Drayton Bird first began to practice this craft.”

How long, exactly, have you been doing this? And how do you still manage to pump so much energy into your work after so long?

Drayton: I’ve been writing for a living for about 62 years.

I started in trade journalism but didn’t get into copywriting until a couple of years later.

I suspected I would never be a huge success as a journalist, which requires one quality I lack: the ability to buttonhole strangers

Copywriting was suggested to me by someone in Manchester (where I was living at the time).

I think the reason I liked the idea was to do with my background and interests.

I was always eager to be a writer but one other profession interested me.

I liked the idea of being an attorney.

David Ogilvy once said one of the qualities of a copywriter is “skill at the art of nitpicking.”

I think I’m quite a good writer for one reason – good writing comes from good reading, and I have done a lot of that.

I doubt that anyone sane has ever read the vast three volume biography of the Duke of Marlborough by Winston Churchill – and a great many other things sane people would never bother with.

I am insanely curious – my former partner used to be vastly entertained by the way that I would read anything, absolutely anything, rather than read nothing.

Wine lists, menus, signs in windows, any damn thing. She was very amused when on a trip to Moscow she noticed I was trying to read the Russian plaques on buildings.

Maybe it pays to be slightly insane if you want to be a good copywriter. I don’t know.

I do know that I am still dreadfully curious at the age of 82.

This brings me to your question about energy.

When I’m not reading, drinking, eating or playing the fool I am usually writing. I write every day.

It’s very unusual for me not to write something on any given day.

I think I’m motivated by fear of failure above all: the thought of not being any good any more terrifies me.

I guess one reason why I have a fair amount of energy is exercise.

I walk between 5 and 7 hours a week. I never learned to drive.

Actually because I am fearfully disorganised I tend to run a fair bit for trains I’m about to miss.

I also do a lot of physical exercise – the bi-product of something that made my reputation as a copywriter really.

This came about because in the 60s I got to write the copy for a product called the Bullworker.

As a result I learnt a lot about exercise and its benefits. That knowledge has influenced me all my life.

Actually, I would say it has saved my life as I was a prodigious and dedicated drinker for nearly 40 years

As an aside I got a letter this morning from a copywriter who told me he had bought a bullworker back in the 60’s as a result of an ad I wrote featuring Muhammed Ali (beat that!)

Nick: Like you, I’m endlessly curious, whether I’m reading about marketing, psychology, finance, philosophy or science. I buy more books than I have time to read!

In your article, A Very Useful Marketing Checklist For You, one of the 11 nuggets of advice you share is, “Does your copy, when read aloud, sound like someone talking? Good!” Why does this matter?

Drayton: It should be conversational for many reasons. The chief one is that people literally read stuff “aloud” in their heads. They really do.

So your copy should sound like somebody talking to them.

This is a good moment to quote the novelist Evelyn Waugh, recently described as the finest writer of English prose in the 20th century.

Besides being a great novelist Waugh was a pig to his wife – a bully.

During WWII. when he was in Yugoslavia his wife would write telling him what was happening back in England.

In one of his responses he scolded her about her writing and said “A good letter should be like a conversation.”

You ask whether this conversational style applies to B2B.

I’m amused by people who imagine that on the way to work people grow a second head and become a “business person”.

A large children’s charity who are clients wrote to me the day before I drafted this saying the copy I had written was too emotional to sell to people in business.

What a load of piffle.

Fancy business language, as you know, bores the hell out of people.

People’s motivations may vary slightly, they may wish to succeed in business as opposed to love, but they retain the same human characteristics..

They have parallel motivations and reactions to those they have at home. Anger, frustration, laughter, depression, all these things apply though they may vary depending on the context.

How can a copywriter be effective in both writing and selling?

If you don’t study selling you won’t succeed.

It doesn’t need to be over the top, or extreme, or lack credibility.

Nick: I agree. To me, good copywriting is all about being as persuasive as possible in a way that feels personal, natural and honest.

It absolutely doesn’t have to be over the top.

That said, conversational copywriting can be messed up too.

One thing that drives me nuts is when I see “fake” conversational copywriting out there… where marketers pretend to be my buddy. I’m a complete stranger to them, but they write to me like I’m a close friend.

That kind of copy may appear conversational at first sight, but it’s definitely not natural or credible.

The other thing I dislike is the use of “conversational selling” by AI-driven chatbots. This is when computers are pretending to hold a conversation with me.

Drayton: I am vastly amused recently by looking at the effects of artificial intelligence.

To my mind, very often, it leads to genuine stupidity.

People like Google have decided that rather than you having to go to the trouble of thinking up your own replies to people’s messages, they give suggested replies so you don’t have to think for yourself. This is the road to hell.

The day that people stop thinking for themselves is the day that crooks, rogues, conniving politicians will take over the world and ruin it.

At the age of 82 I think it’s happening.

Nick: You’ve been doing this for a long time now. Has the craft of copywriting changed since the day you first put pen to paper? Or is it simply the media that have changed?

Drayton: Has the craft of copywriting changed since I first put pen to paper?

Well, I rarely put pen to paper because I can’t read my own handwriting.

The great writer Dr Johnson when old saw something he had written when he was young and said “When I wrote that I knew exactly what it said. Now God only knows.”

I started writing with an old-fashioned Underwood typewriter, probably dating back to the 1930’s, but the craft has not changed.

I am shocked by how few copywriters bother to study the greats.

Make a good offer or threat

Use language everyone understands

The media have changed, but these rules remain the same.

But I never really vary my approach just because the media is different. I make use of the things that didn’t exist before, such as moving pictures, but human nature has not and cannot change.

“Plus ça change, plus c’est la même chose” is the French saying: the more things change the more they stay the same.

Nick: Drayton, thank you. I really appreciate you taking the time to do this. If people want to reach out and connect with you, and find out more about your work, where can they go?

Drayton: You can e-mail me at drayton@draytonbird.com. If you want to learn from me I suggest you go to askdrayton.com where you will see my copywriting and second of all see how to get very cheap advice from me.

Thanks for asking me to do this, Nick

Note: If you’d like to know more about conversational copywriting, check out the course information here… 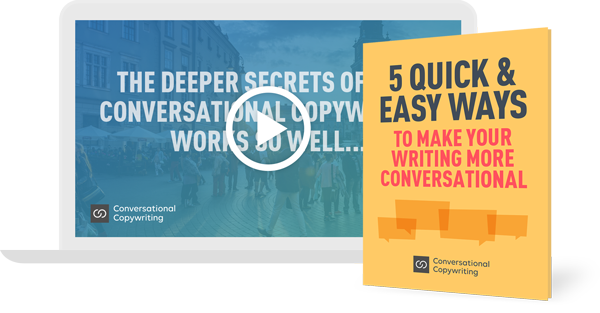 1 thought on “How to be conversational in your copy, without losing focus on making the sale – with Drayton Bird.”